We’ve got a lot to catch upon so the posts for the next few days won’t be in chronological order but in order of what I believe to be more important.

So let’s talk about Eastleigh. You know the results and we lost fairly badly really. Some of this is midterm blues. If this was a general election, from polling done by Lord Ashcroft, we would probably have won because a lot of Lib Dem voters would have gone Labour and some UKIP support would have gone to us. Obviously local issues played a big part in Eastleigh helped especially by the Liberal Democrats absolute rule over the constituency’s council.

But significantly 43% of UKIP supporters would vote the same again if this were a general election, which is far too high. Lots of UKIP is derived from immigration. Something connected, but weirdly seen as different considering the number of European immigrants, from issues surrounding the EU. The Government is working on that however. As was announced probably too late yesterday, immigration to the UK has gone down by 1/3.

In my opinion there is a greater issue at work and it’s the obvious one which the Government has yet to do anything on. It’s the economy. Is there really any difference between us and the last Labour Government? Sure we are in coalition with the Liberals but that’s no excuse. In departments like education and local government we have gone very far with policies the Lib Dems on any day would disagree with.

But David Cameron is presiding over tax increases, except for those with the lowest incomes. We have a cut corporation tax and income tax will go down this year but isn’t this offset by increases in VAT and capital gains tax, for example. Essentially there have been no tax cuts to get the economy going, it could be argued, that there is a net increase in taxation. We need to get the economy going with tax cuts for all.

Last year our debt increased. This year our deficit will increase. We have cut virtually all parts of government and yet despite the pain that this has caused we’re blowing the money saved elsewhere. Where do you think HS2 is coming from? The Chancellor is spending all the money from the cuts in desperation on state funded projects to get some growth in the economy. This is making everything worse really. In 2015 are we really going to have a reduced deficit?

The public have rightly perceived that on the economy we are going nowhere. What matters is jobs and household incomes increasing and we get that through businesses growing. There are of course other factors but the real truth is on economics we’re no better than Labour. This is the ‘liberalness’ problem David Cameron faces and the real reason why voters are being turned away from the Tories. We’re relying on left wing economics. 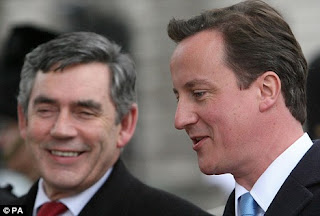