Yesterday #ThingsElliottSays exclusively revealed that Cllr Sam Fletcher, a UKIP town Councillor for Keighley, was involved in an embarrassing adultery scandal. Yesterday after this piece the same man, unprompted by others, continued saying misogynistic and homophobic things on the same Facebook post about immigration. Sam Fletcher is the councillor for Bracken Bank and Ingrow Ward and also the West Yorkshire Officer for Young Independence (the UKIP youth movement).

Cllr Fletcher decided the best thing to do after all of yesterday's saga was to start insulting gay people.

And of course the best way to publicly finish off attacking gay people is to make an Aids joke.

Of course Women were also highly disrespected by Cllr Sam Fletcher, although he claims to be a feminist.

The thing is Cllr Fletcher isn't being a troll or just trying to make people laugh he is being absolutely serious (apart from the aids joke). It was thus time somebody pointed out the tax payer cost of Cllr Sam Fletcher.

I bet Rob Comely, the current YI chair, is quaking in fear from such a top quality opponent. No wonder that YI website is currently fleeing from this disaster.

So what did Cllr Fletcher have to say about all these vile things he said.

Well here is what fellow Ukippers had to say about that.

#ThingsElliottSays could just stop the article here but two new things have come to light about Cllr Fletcher's adultery scandal yesterday. Firstly, due to an eagle eyed #ThingsElliottSays' Source, I have been able to recover one of Cllr Sam Fletcher's deleted comments from the Facebook post. Sadly for Cllr Fletcher this does not bode well for his views on women or ideas on what adultery is. 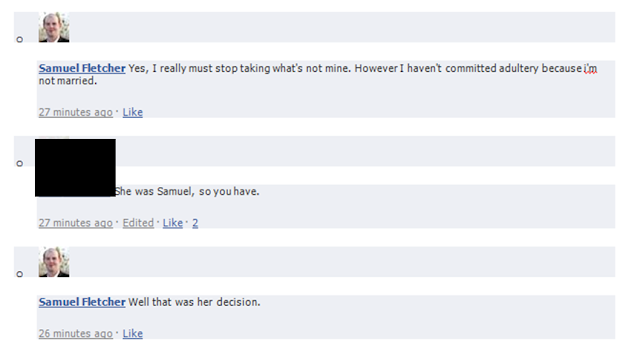 I also managed to interview Cllr Sam Fletcher to see what is going on in his mind. It was the most surreal interview I have ever done because some of the most ludicrous things were said in it. Cllr Fletcher told me 'I have no problem with homosexuals ... Certainly not politically', which leads me to ask does he have a problem with gay people in a non political sense? Sam Fletcher then said about women 'I don't have any "derogatory views" about women. I respect all women as people.' Yesterday's comments about mushrooms and women were also definitely not linked 'I want to say that I was actually talking about mushrooms. Honestly. Not women. Mushrooms are not a euphemism for women or any part of their anatomy!' 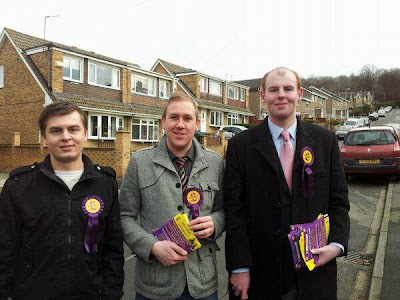 But the most weird part of this whole interview is that according to Cllr Sam Fletcher he made up the entire story about adultery. He did this because  'I actually had sex with a girl who wasn't married. Well it was when I told them about the girl having made remarks about a certain part of my anatomy and they asked who and I thought bugger I can't say who. So I said she was married and therefore I couldn't say to cover myself. That's how it started.' This is the most bizarre excuse I have ever heard. It implies that Cllr Fletcher willingly said that he committed adultery, which he then later said was sincere and not a lie, knowing full well the controversy it would create. It is a very bizarre thing to do if true. #ThingsElliottSays' doesn't think anyone can believe this story, but that would be for you to make your mind up over.