What is going on with the civil service at the moment? There have been in the last week several stories about a so called ‘war’ between Whitehall and Ministers. Ministers are complaining that bureaucrats are deliberately changing or stopping legislation, which I don't think is in the job description of civil servants. Well YouGov have asked a set of questions to the public about what they think about this battle taking place. From the results it seems Yes Prime Minister or the Thick of It is viewed as a documentary with 40% of people believing that civil servants have too much power, 43% think that civil servants deliberately stop government legislation because they don’t agree with it and 48% believe they are too resistant to change.

However, is this the case? Has the Thick of It become so much a part of the public’s subconscious that it is viewed as true? Are civil servants actually doing what they want? Steve Hilton, who left No10 as Cameron’s advisor last year, believes that British ‘bureaucracy masters the politicians’ stopping or changing policy decisions which the PM doesn’t know about until he reads them in the papers over his toast. This includes government policy about reforming the civil service which is just being started. Lord O’Donnell, the former Cabinet Secretary recently said that ‘reforming the civil service comes quite a way down my list of priorities’; despite civil service reform being a government priority which the independent civil service think tank the Institute of Government and Tony Blair backs.

It does seem that the demos of Britain have hit the nail on the head then. 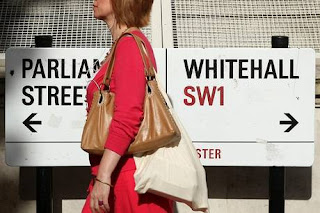